WELCOME TO THE RABBITS SECTION

< GO BACK TO MEMBERS PAGE

To be eligible to play in YRGA competitions, Rabbit golfers must have a handicap index of 15 or more, extending to the maximum handicap of 54.  Team competitions require one player within the range 15 – 19.4 and the other in the range 19.5 – 54.

These rule changes have been made by the YRGA and BDRGA following the introduction of the World Handicap System by Golf England on 2nd November 2020. Previously Rabbit golfers were eligible with a playing handicap of 15.5 or more

You can become an annual Member or Associate member of the Section by paying £5 to any Committee member below or by putting your payment in a named envelope in the box within the pro shop.

In addition to taking part in the competitions below, you will be entered in a monthly draw where 2 members will win £15 credited to your pro shop account. We also award a credit of £25 to any member or associate member who has a hole in 1 in any official weekend qualifying club competition

Full details of Rabbits competitions, matches, members and Committee members are listed below and displayed on our notice board in the gents locker room.

Following the Government restrictions and lockdowns caused by the Covid-19 Coronavirus pandemic and advice from golf’s governing bodies, the BDRGA and YRGA postponed all Rabbits league, knockout and team fixtures from 2020 to 2021. Owing to the scale of cancelled fixtures, last year the Rabbits Committee decided to suspend membership of the Section for the 2020 season, including suspending the monthly draws. Anyone who joined in 2020 will also have membership for the 2021 season. A list of current members is displayed in the gents and ladies locker room and held in the pro shop

The monthly Rabbits Section draws resumed in August 2021. The winners for September are David Short and Mark Wilcock who both receive £15 credited to their pro shop accounts. Congratulations to both. A list of previous winners is displayed on the Rabbits Section notice board and in the Ladies locker room.

Don Marshall Memorial Trophy – this Order of Merit trophy for the best overall Rabbit golfer in all competitions this year has been won by Dave Priestley by 1 point from Andrew Flaherty as runner-up. The full league table results are on the Rabbits notice board in the gents locker room.

Thwaites Trophy – was narrowly won by Andrew Flaherty 2 & 1 against Dave Priestley in the final of this knockout competition.

Rabbits Officers’ Trophy – was narrowly won by John Barrott with 34 points on a countback with Andrew Flaherty.

Shipley Challenge – in this annual 4BBB matchplay match played at Shipley on 19th September, the home club won handsomely by 5 matches to 1. Andrew Flaherty and David Steel were the only winning pair from BSIGC.

BDRGA Team Championship – in this competition on 12th September at The Manor, with 3 of the 4 scores counting the team of John Raybould, John Barrott, Gary Knapton and Martin Ball scored a total of 92 points coming 13th out of 17 teams who entered. A further 7 eligible clubs did not enter a team.

Rabbits v Ladies – in this annual match played over 12 holes on 1st September, the Rabbits team of 12 won with a total score of 160 against the Ladies total score of 137, thus retaining the Clare Lyness trophy.

Rabbits Presidents Cup – in this single stableford competition on 22nd August, Gary Knapton won Division 1 with 38 points, Jamie Gott won the Trophy and Division 2 with 43 points, and Brian Brooks won the Associates Division with 42 points where Eddie Hodgson was runner-up with 39 points. 7 players shared the 2s club winning £8.28 each. Nearest the pin was won by Criag Robinson who wins a box of 12 golf balls. The full results are available on HowDidiDo.

July Buck Rabbit – Paul Risdon won Division 1 with 26 points, Keith Atkinson won Division 2 with 25 points and Tony Teale won the Associates Division with 28 points. All 3 winners qualify for the Buck Rabbit final on 26th September. No 2s were scored and therefore the fund will be included in the August Buck Rabbit

June Buck Rabbit – Gary Knapton won Division 1 with 26 points, Trevor Jones won Division 2 with 28 points and Hilary Kendall again won the Associates Division with 29 points. All 3 winners qualify for the Buck Rabbit final on 26th September. The only winner of the 2s club was Paul Dowd who received the full pot of £61 – a new record.

May Buck Rabbit – Brian Gomersall won Division 1 with 22 points, David Kind won Division 2 with 25 points and Hilary Kendall won the Associates Division with 26 points. All 3 winners qualify for the Buck Rabbit final on 26th September. In the 2s club, Ronnie Dawson and Dave Scott won £22.50 each. Full results are posted on the notice boards

BDRGA Chippendale Trophy – in the first round of Section A of this foursomes competition, Mr Chairman Jim Smith and Gary Knapton won at Fulneck 1 up. In Section B, Andrew Flaherty and John Raybould won at home to South Bradford also 1 up. Unfortunately both teams lost in round 2 at Clayton and Halifax Ogden respectively.

YRGA Fowler Trophy – in the preliminary round of Section B of this foursomes knockout competition, Mr Captain Ray White and Graham Sugden beat Masham Golf Club 5 & 3 on 22nd April. The Masham team gave very complimentary feedback about BSIGC hosting the match and the hospitality provided. Unfortunately they did not win through the next round at home to Bradley Park.

We run club competitions, usually on a Sunday, with pro shop voucher prizes for winning Rabbits and Associate members. These are listed below – further details and how to enter are displayed on the Rabbits notice board in the gents locker room.

The Buck Rabbit competition, played as a stableford over the first 12 holes, is held on the first Tuesday of every month with the winners of each Division receiving prizes and qualifying for the final trophy competition.

Rabbits golfers are also eligible to enter the Thwaites Trophy knockout matchplay competition which takes place from May to September.

We also enter a team of 3 in the BDRGA league matches and 2 teams in the respective BDRGA and YRGA Chippendale and Fowler foursomes knockout competitions.

The following fixtures have been organised for 2021 –

Friendly matches, with alternate annual home and away fixtures, have been arranged with the Rabbits Sections of other local golf clubs, giving the opportunity to play sociable golf at another course free of charge, paying only for the meal afterwards. The fixtures arranged this year are –

A sign-up sheet will be displayed on the Rabbits Section notice board closer to the date. Selection for away matches will give priority to those who play in the home fixtures

If you wish to speak with or join the Committee, please get in touch with any of the members below

The Committee Meeting dates for 2021 are – 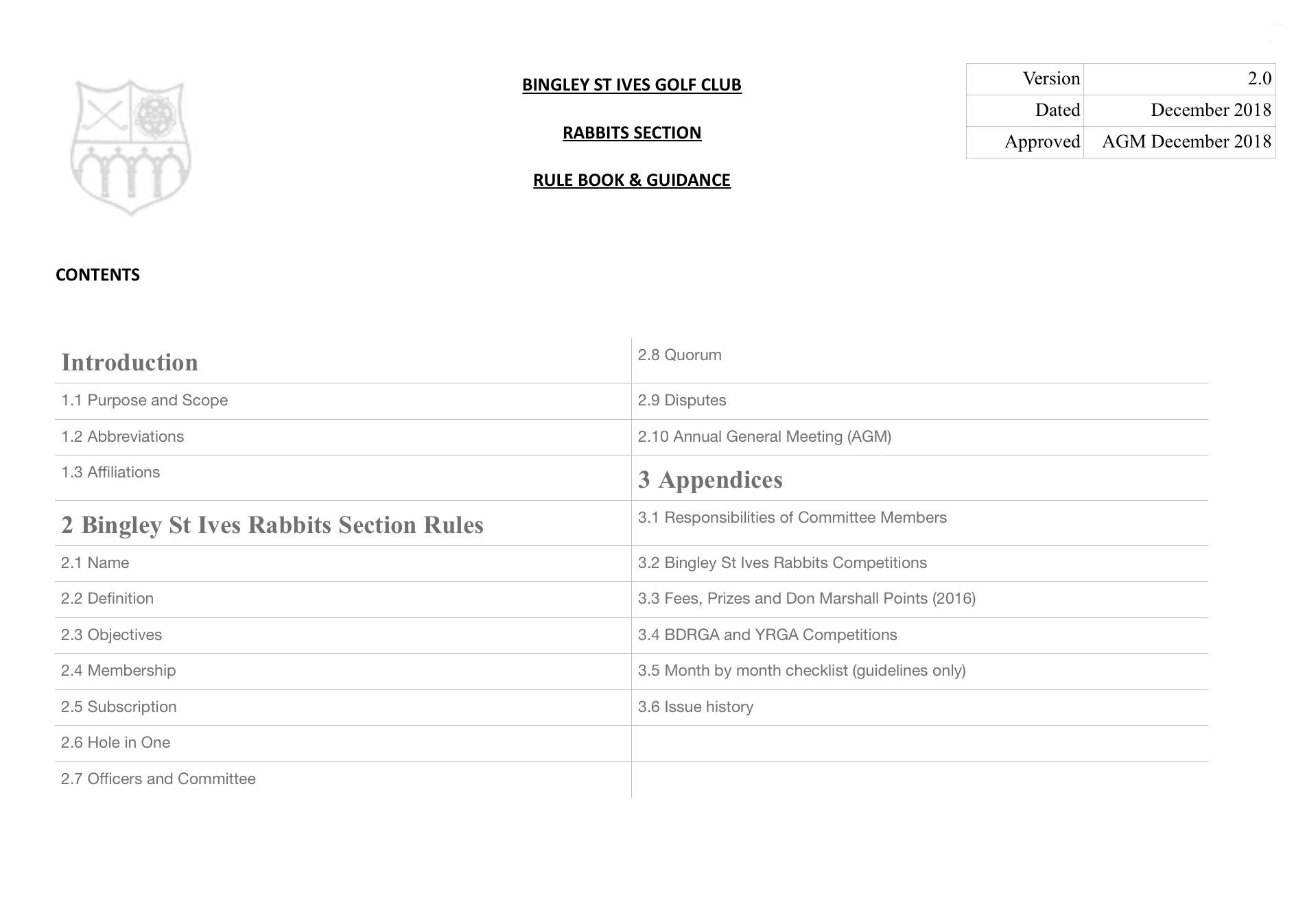 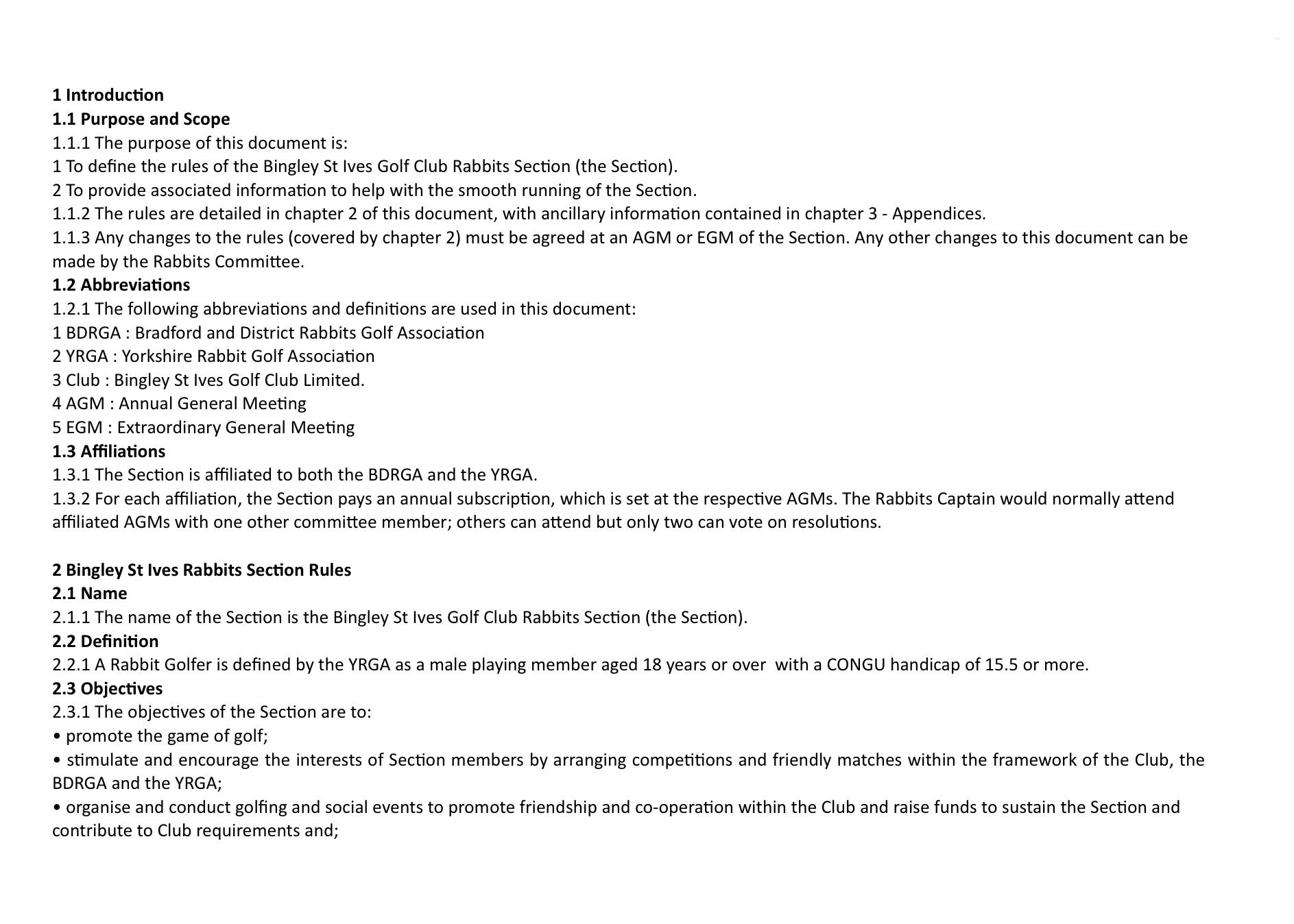 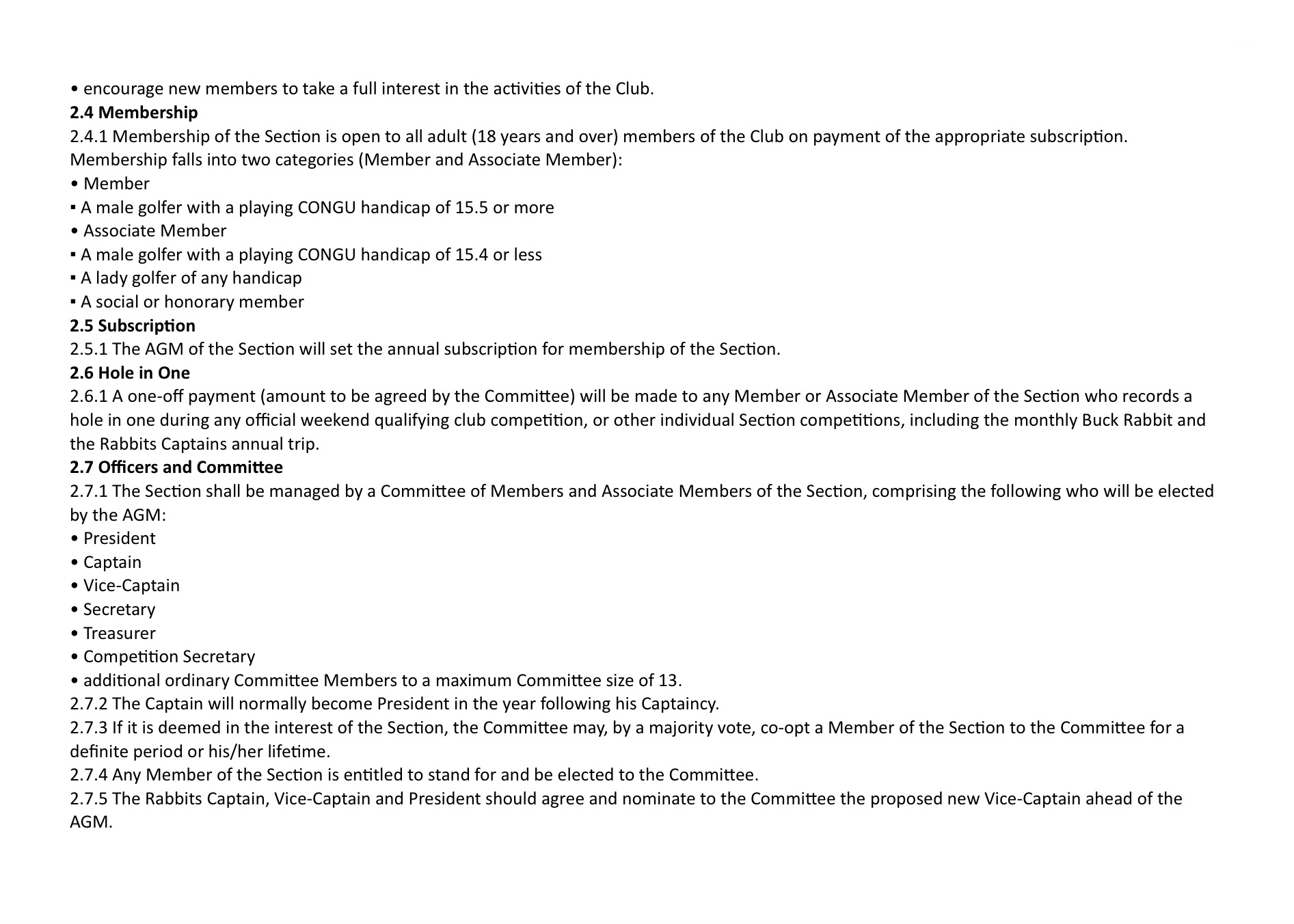 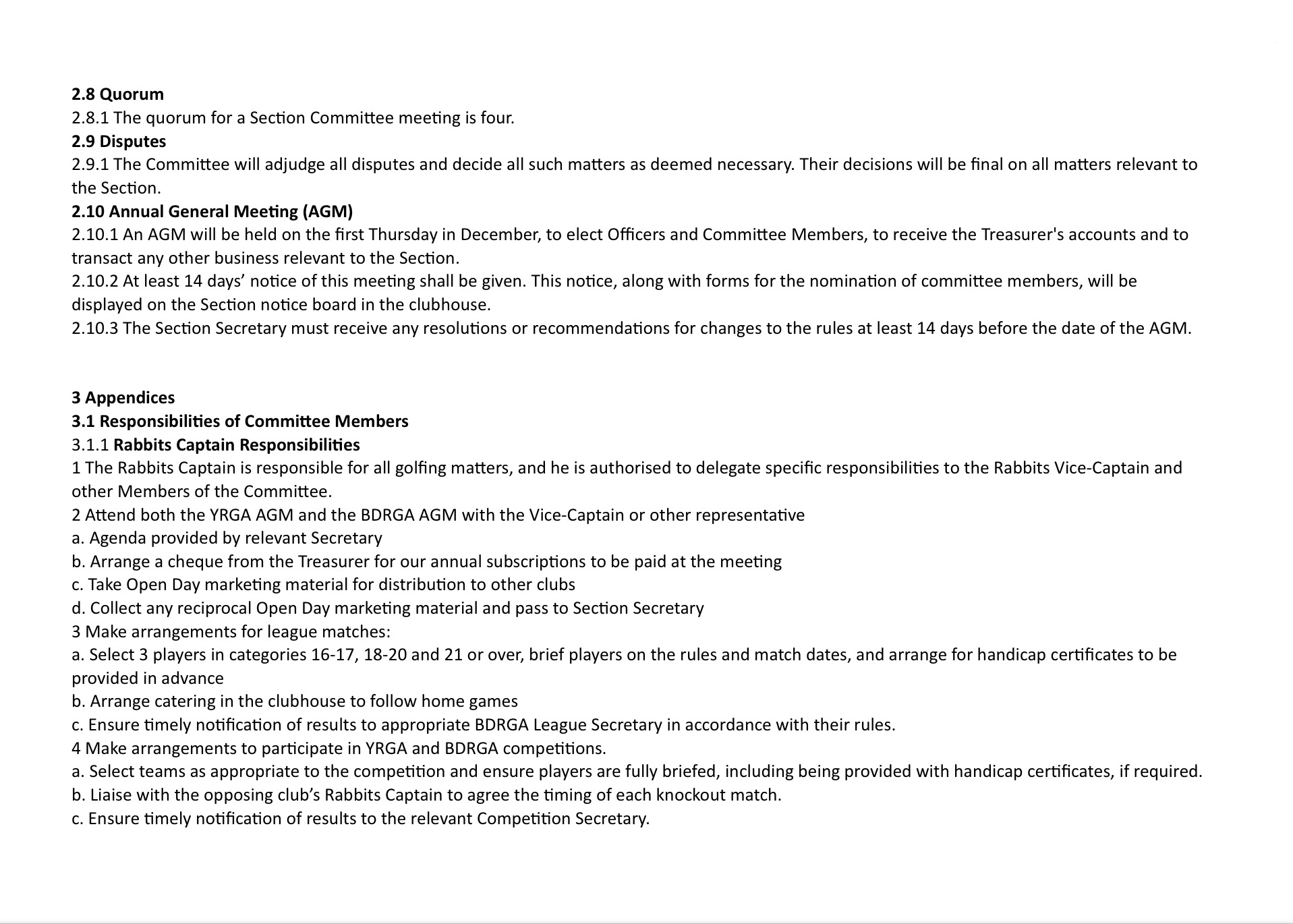 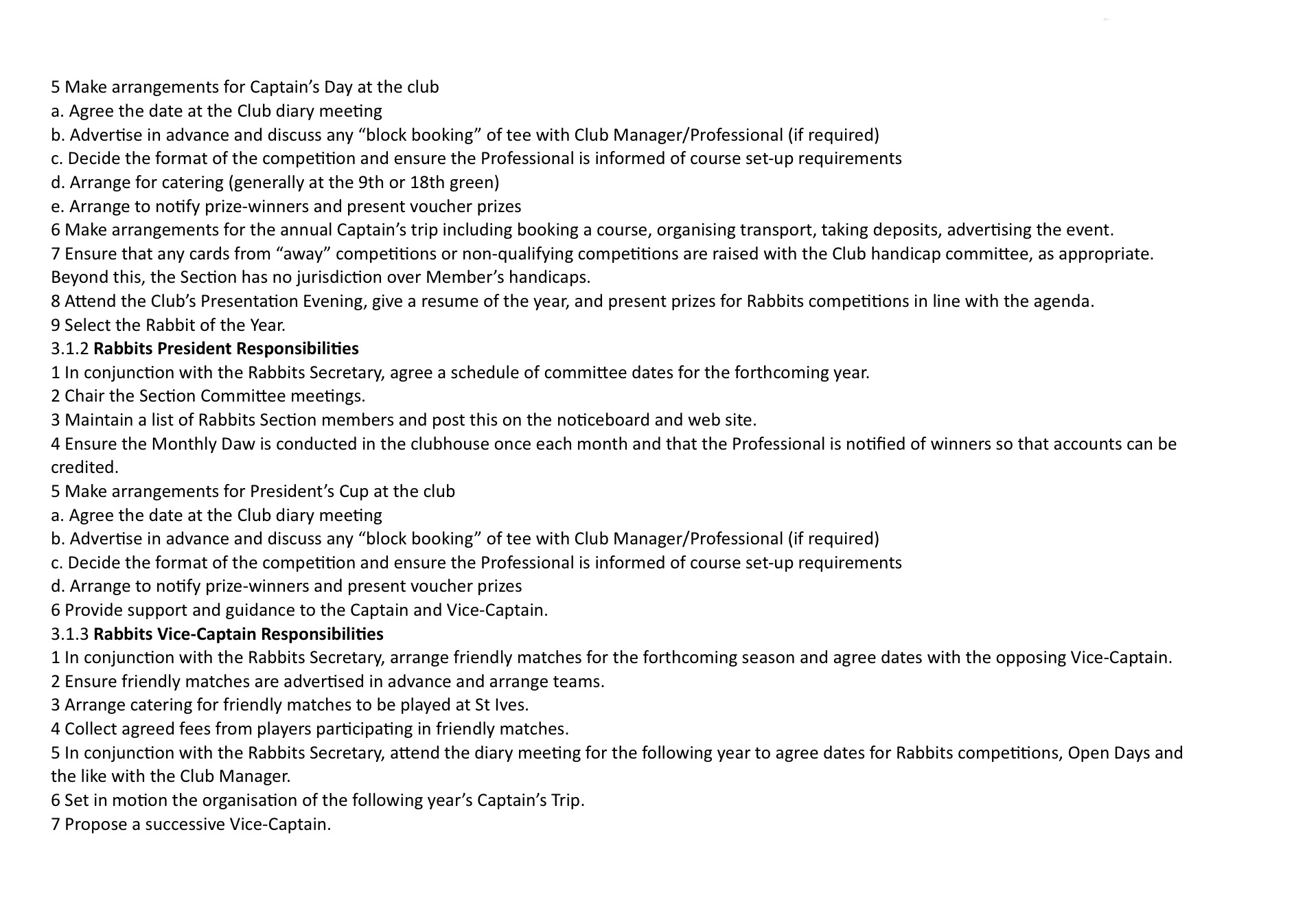 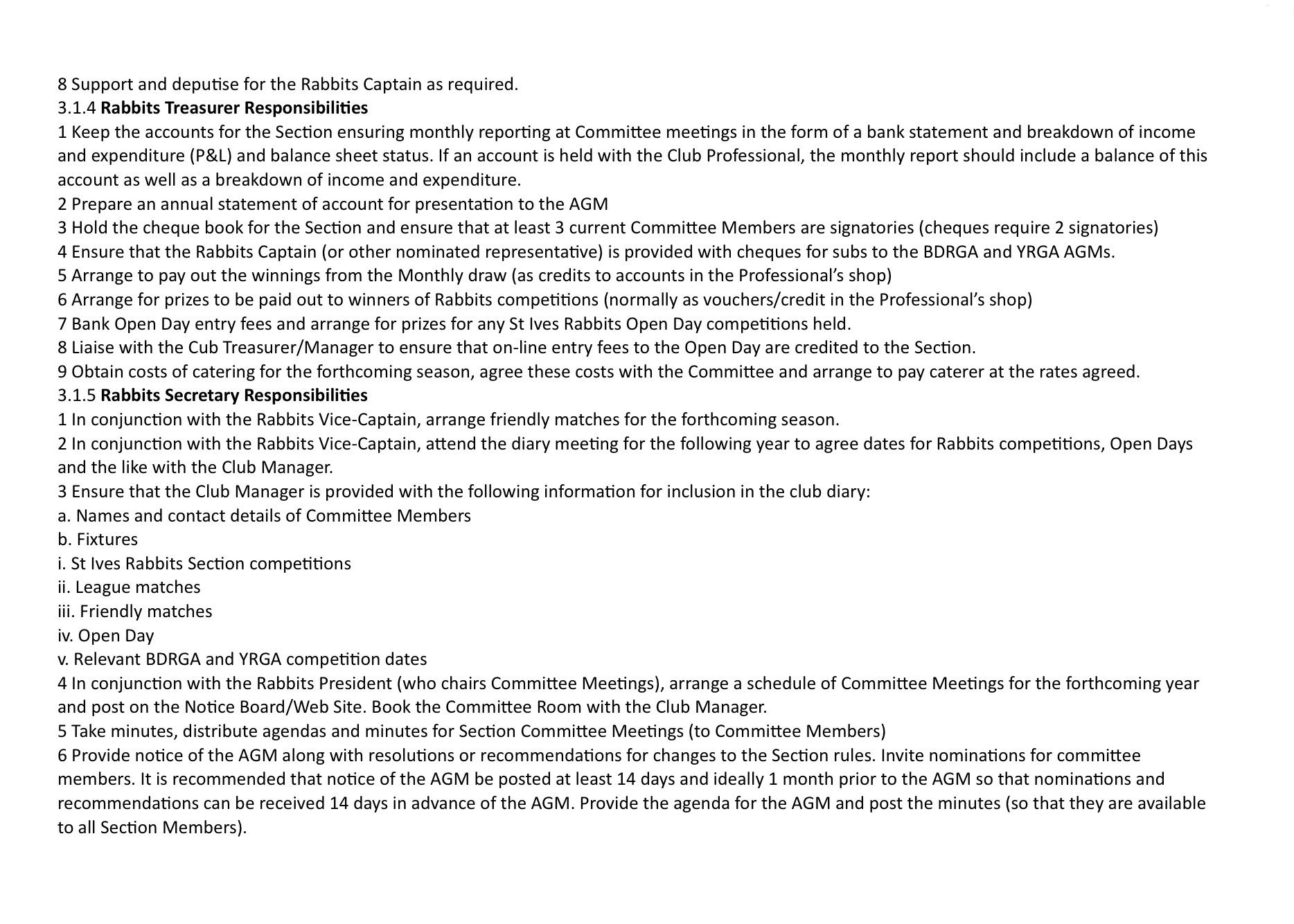 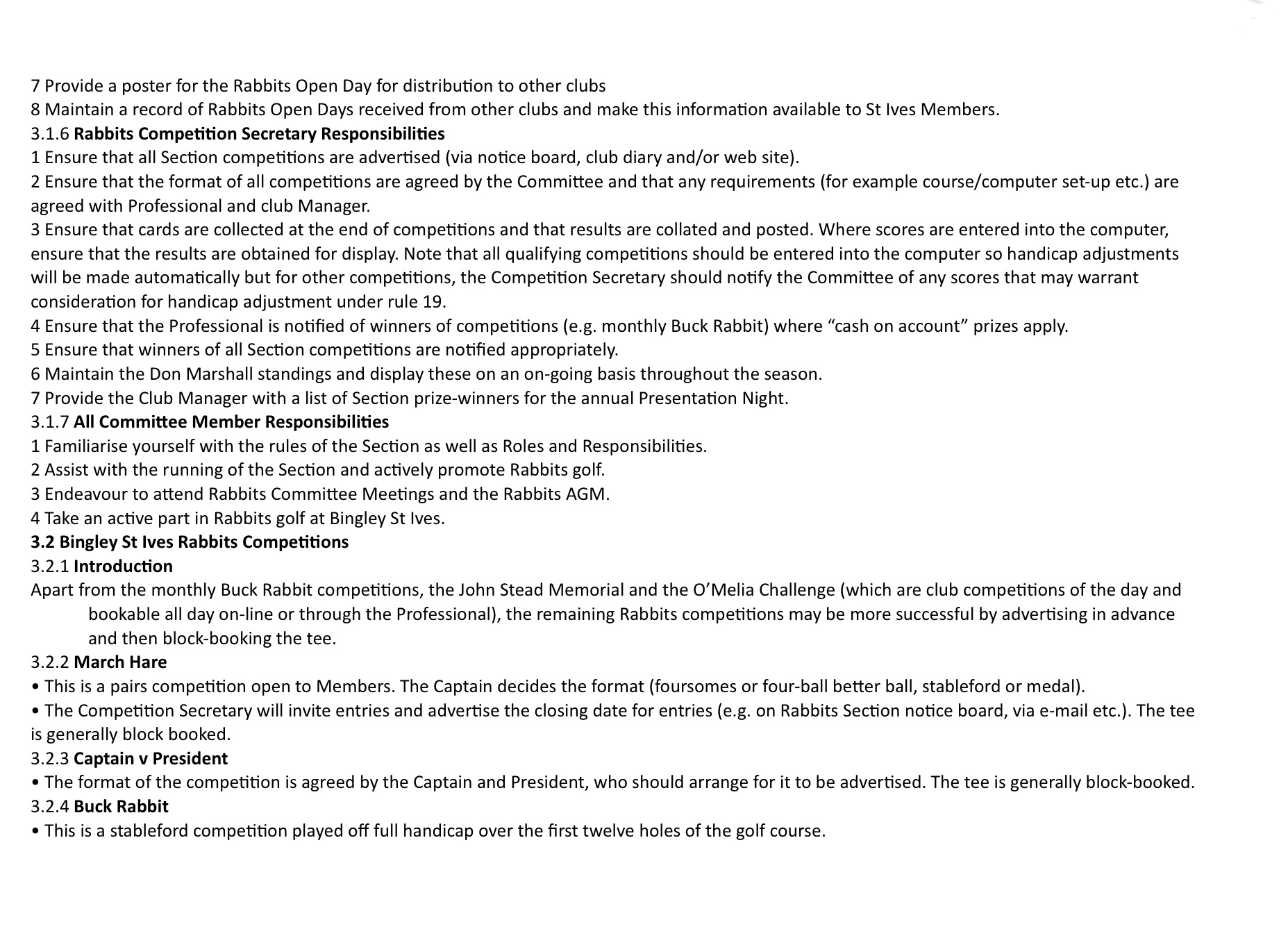 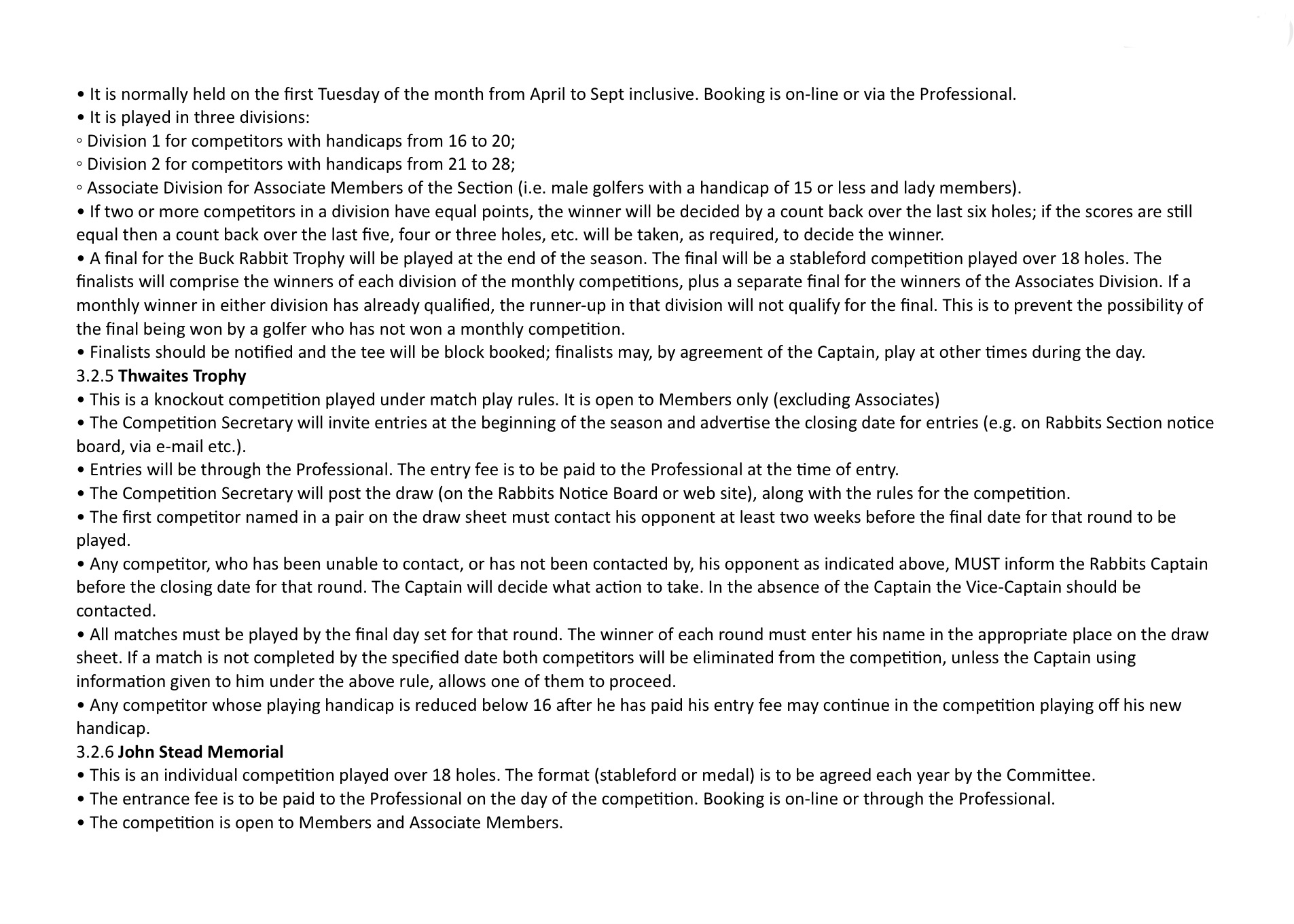 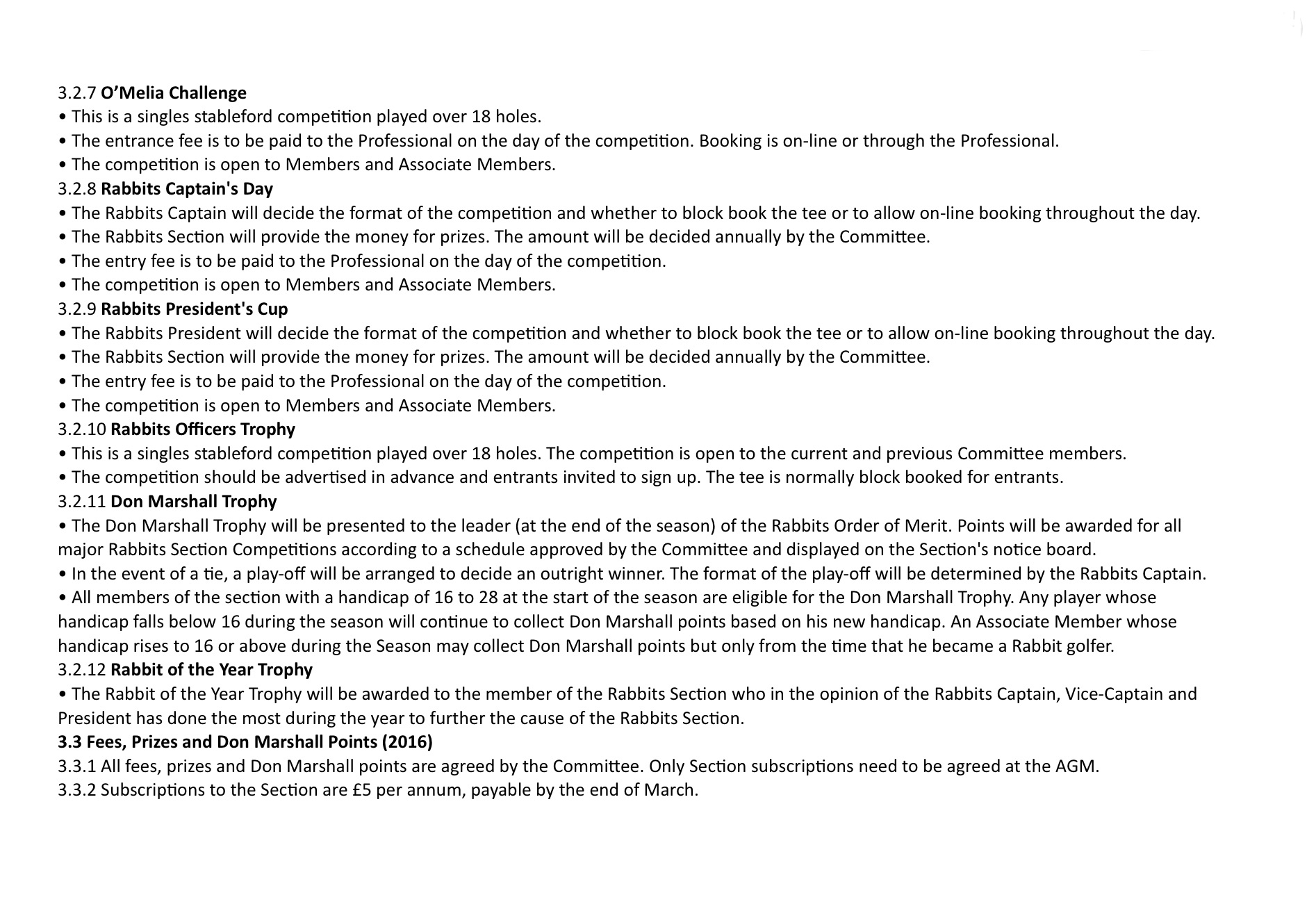 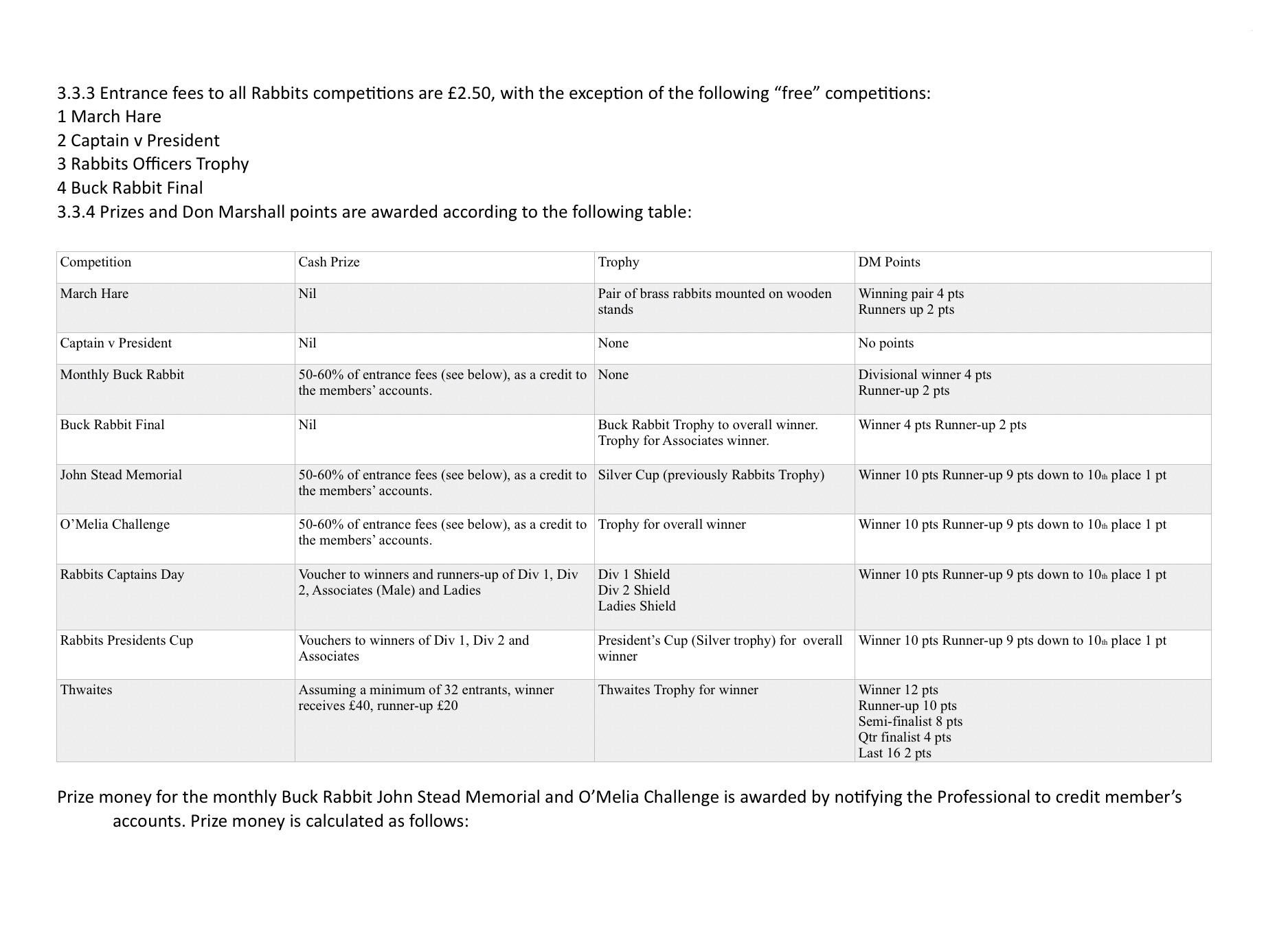 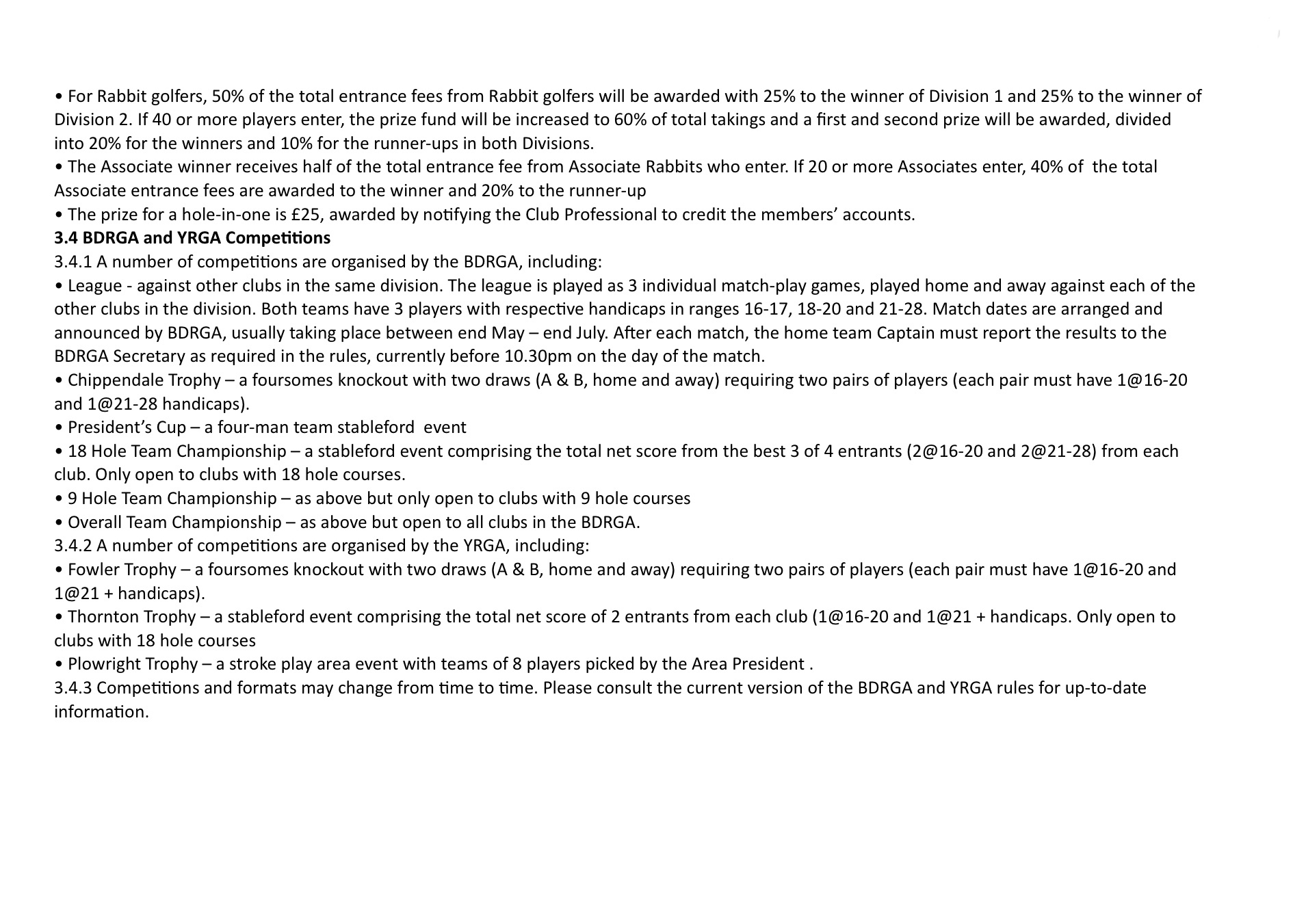 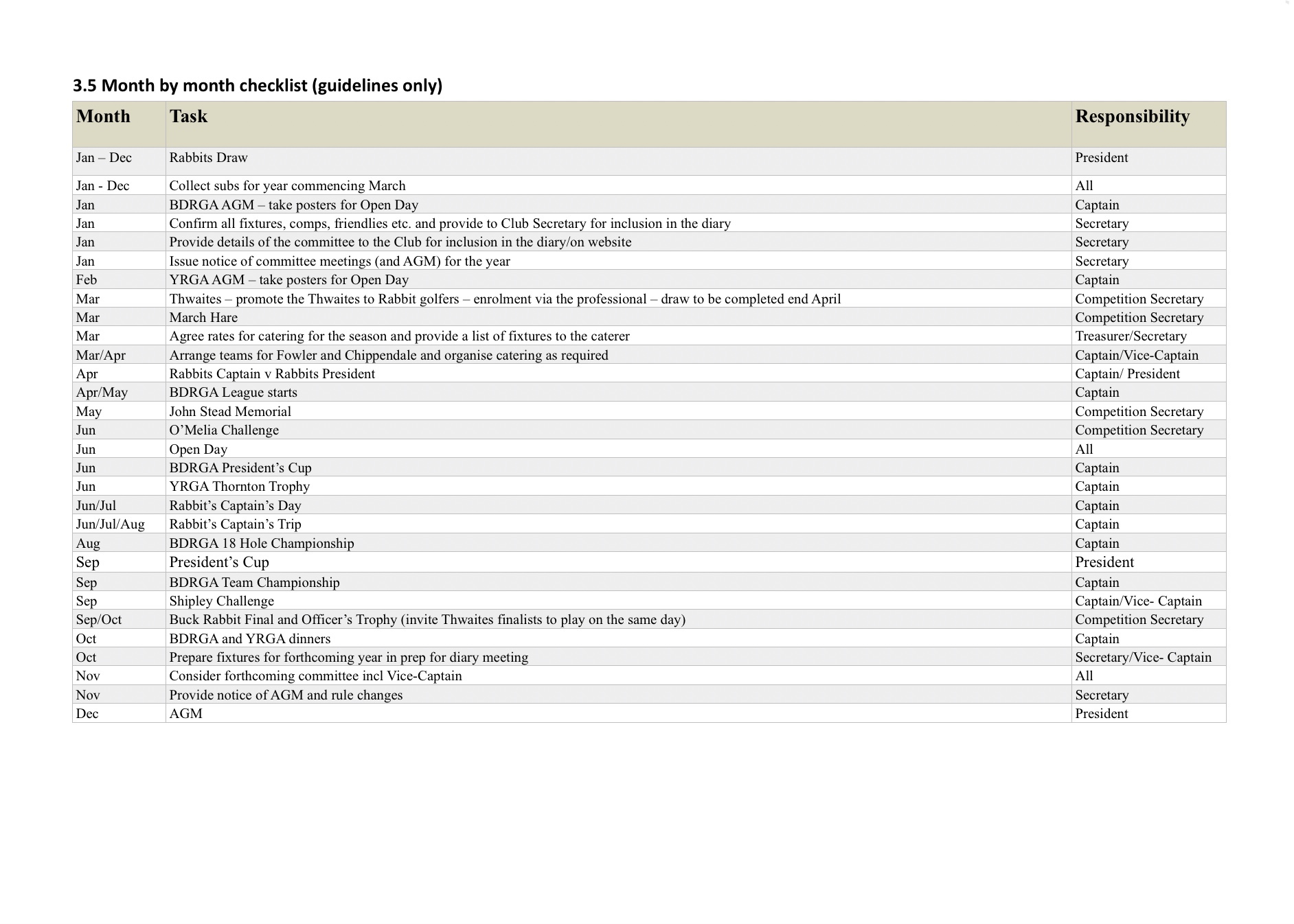 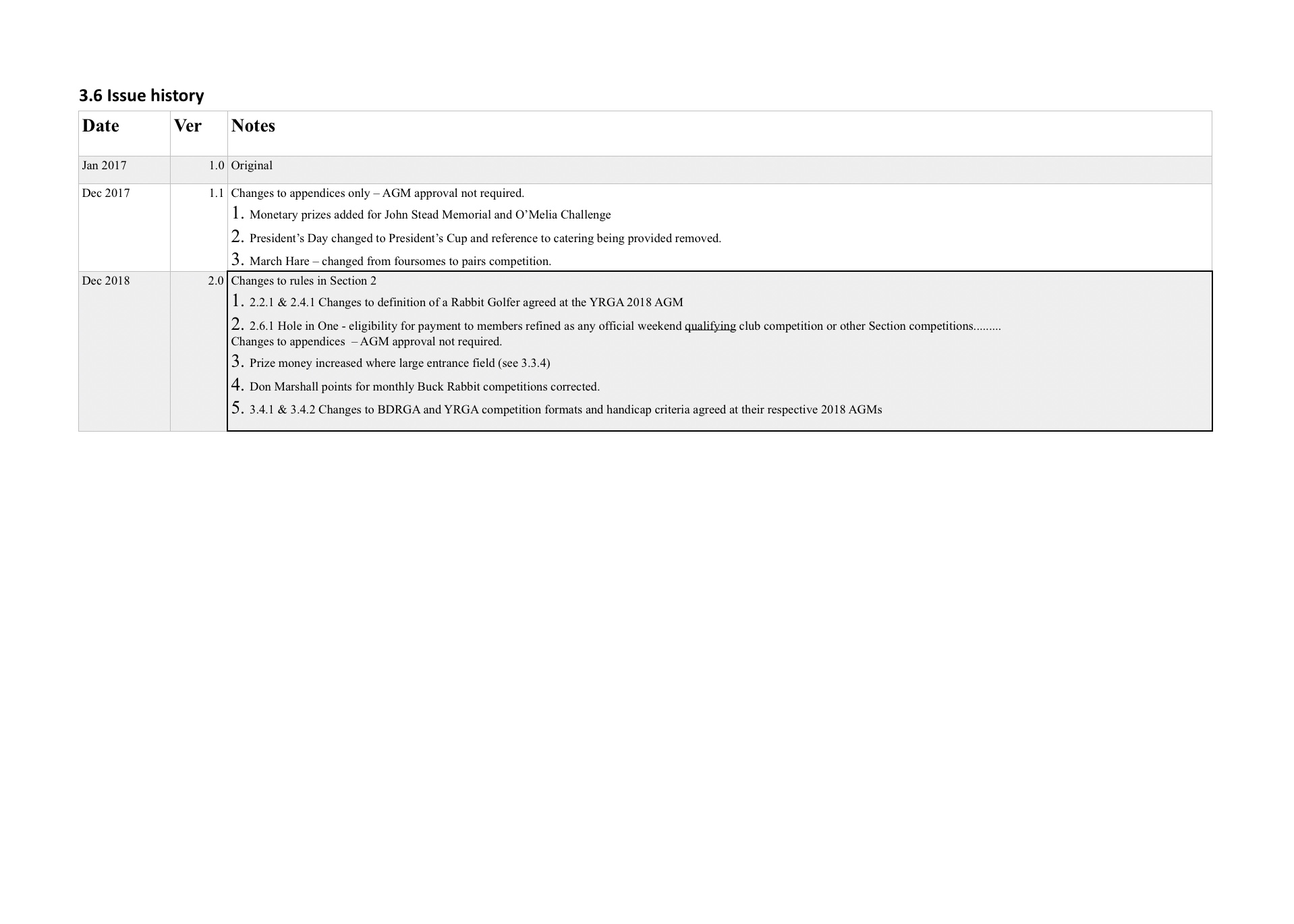